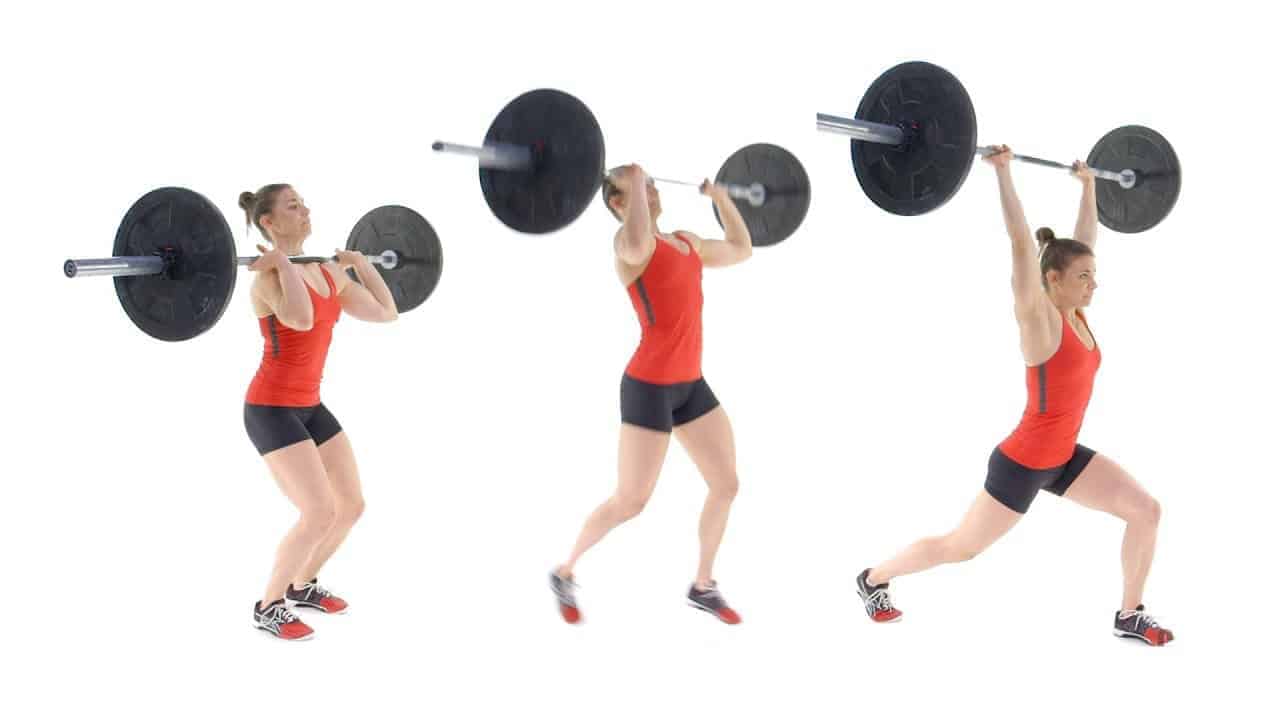 The split jerk is an overhead movement designed to move the heaviest loads in the shoulder to overhead family. It is a fast, powerful movement that tests the most accomplished lifter in their balance, coordination, and core stability. While not exclusive to CrossFit, the split jerk is commonly seen in CrossFit gyms and workouts.

An added layer to the split jerk is the inclusion of necessary footwork that is absent in other olympic lifts. While it can be daunting to a newer athletes, the split jerk is an excellent addition to any program for its ability to challenge not only the entire body, but also build the lifter’s balance and coordination.

How do you set up for a split jerk in CrossFit?

A good split jerk begins in a perfect front rack position, which consists of a solid grip on the bar with hands just outside the shoulders. Users with larger biceps or difficulty in externally rotating the arms will probably need to use a slightly wider grip.

From there, lift the elbows until they are at or as close as possible to 90 degrees. A good front rack will set the user up for optimal bar path as the weight is moved overhead.

Where should your feet be in a split jerk in CrossFit?

The next important facet of the split jerk is a solid foundation or stance. The ideal position is a shoulder width stance with feet slightly externally rotated. This is where some variation is seen from athlete to athlete.

Some use wider or narrower stances than others. I prefer a stance similar to the back squat, not too wide or narrow. This allows me to generate the most force for my body type and mechanics. Try out a few different stances and see what works best for you!

Now that the lifter is in a perfect starting position, we can move into the dynamic portions of the lift: Dip, Drive, and Drop.

The Dip is best described as a slight, outward bend of the knees. No more than a few inches, straight down. You want to keep your trunk in an upright position.

Next comes the Drive, a quick violent extension of the knees and hips. The force generated from this movement should be enough to begin to move the bar overhead with little work from the shoulders. The arms should only serve to guide the bar in a straight path as it moves into the overhead position.

Again, this is a quick and aggressive drive through the heels. The goal in the Drive is to generate upward force so the bar will begin to seemingly float overhead for a moment, which will allow you to begin the Drop.

Many novice lifters ask, “Which foot goes forward?” The answer is simply, whatever foot you would use to break your fall, as this is known as the dominant foot.

Dominant foot goes forward and the other leg will shoot back, in a slight bend, with the back foot slightly canted outward. The arms will be at full lockout with arms externally rotated to stabilize the load overhead. A braced core is paramount in ensuring that the load remains stabilized and locked out overhead.

To recover from the receiving position, begin by taking just a half step back with the lead foot, followed by a similar step forward with the rear foot. Repeat until the bar is overhead and feet are shoulder width apart.

This is the safest way to recover from the bottom of the receiving position. The core must remain braced with a stacked spine to maintain optimal tension and stabilization.

The split jerk has it all.

The split jerk is a multi phased olympic lift that places demands on the lifter’s balance and coordination that is not commonly seen. This forces the lifter to be in tune with their body to execute a successful lift.

The entire body is in motion during the lift – upper and lower hemispheres are either stabilizing the load or splitting the legs to keep a solid base. The split jerk is an athletic movement that can aid in the lifter developing many elements of fitness.

Whether you are doing split jerks in CrossFit or in another workout routine, if you are looking to increase power, strength, balance, coordination, core strength, explosiveness, and mobility, then the split jerk is an excellent movement.

The split jerk can be complicated in nature, so starting light with practice, coaching, and slow progression will yield the most success.

Objective vs. Relative Strength: What’s the Difference?
Next Post: What is The Level Method?