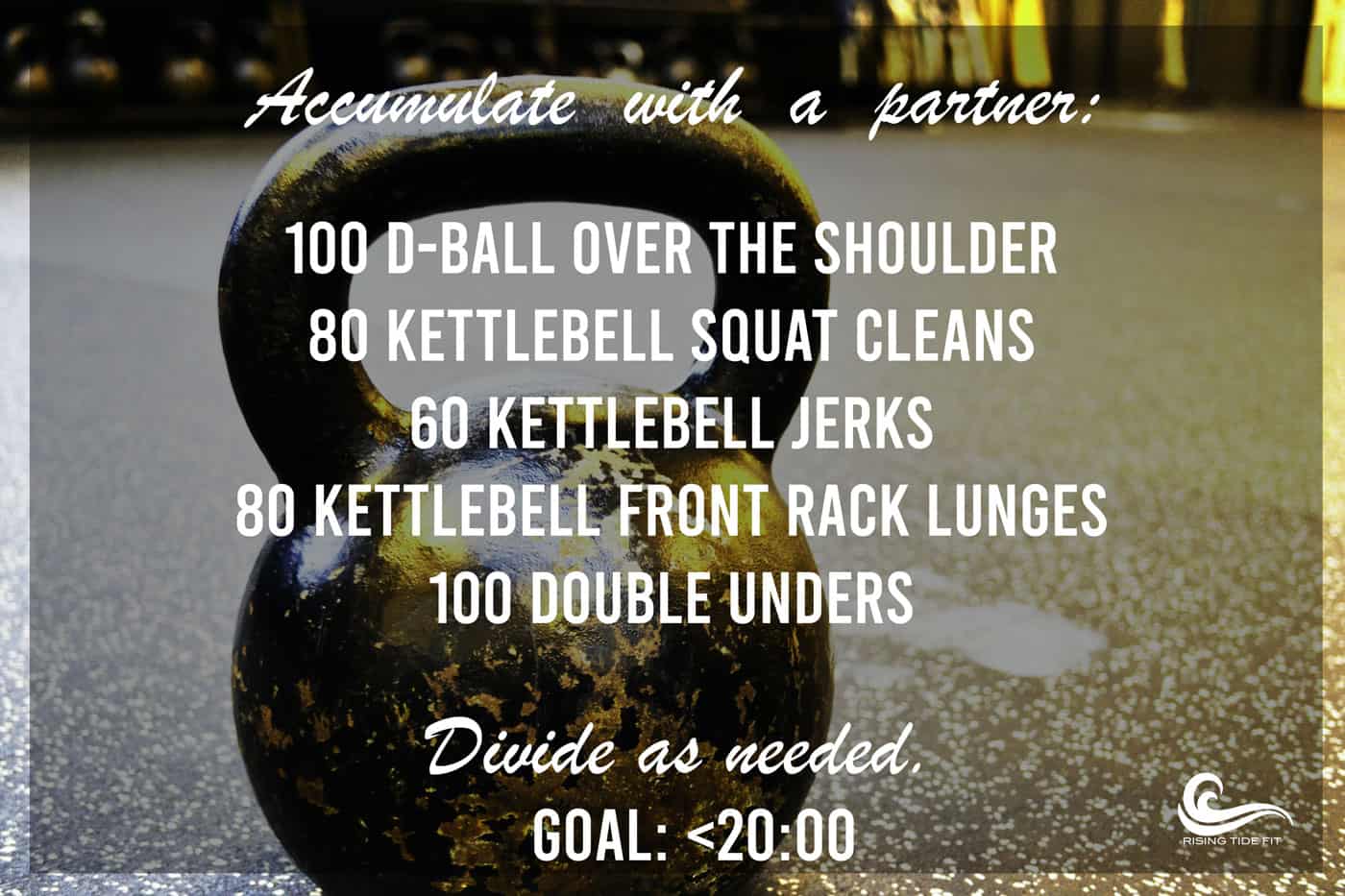 Use this partner kettlebell workout for a great full body workout session. If you don’t have all the equipment, that’s ok. Substitutions are listed in the modifications sections below.

A kettlebell is one of the most versatile pieces of exercise equipment out there. If I could own only one piece of equipment to work out with for the rest of my life, a kettlebell would be it!

One of my favorite kettlebell movements is the Turkish Get-Up. They require slow and controlled movement, complete concentration, and they will build you a core of steel.

There are five different movements in this workout. All movements in functional fitness can be modified, or what is often referred to as scaled, to make them accessible to anyone.

Scaling options look different depending on the movement – sometimes a lighter weight is used; other times the movement itself is modified.

If you have equipment limitations, I’ll give you suggestions for that too!

This workout can get grippy. If you struggle with grip, be sure to have some chalk on hand to reduce slippage. Then read this post to find out why you should work on strengthening your grip!

Also sometimes referred to as a medicine ball, A D-Ball is a rubber ball that is about the size of a small soccer ball and is full of sand. They come in varying weights and can be used for many different exercises.

In this kettlebell partner workout, we’re going to squat down, scoop it up off the ground with both hands, stand all the way up, and then toss it over our shoulder.

The weight should be heavy enough to be challenging while still allowing you to move quickly through the reps.

If you don’t have a D-Ball, you can use a medball, a sandbag, or a backpack or duffel bag packed heavy.

If all you have is a kettlebell, sub a weighted glute bridge instead: hold the kettlebell on your hips and be as explosive as possible with the glute bridge, focusing on opening your hips HARD.

The trick to any squat clean is to get under the weight as fast as possible. This is counter-intuitive to what your body is telling you; self-preservation instincts do not encourage you to put your body under something heavy that is crashing towards the ground.

Kettlebells make this a little less scary than a barbell. Keep a good strong hold on the kettlebell.

Focus on driving through your feet, standing all the way up, and shrugging your shoulder.

When you feel the kettlebell start to float up for a moment, this is your cue – pull yourself down into a squat and catch the kettlebell in a front rack position.

A jerk requires a dip, a drive, and a drop – a second dip of the hips where we pull ourselves under the weight before standing all the way up. This makes the weight easier to stand up when it gets heavy.

Think about dipping in the hips, squeezing your butt hard, then punching up to the sky with the kettlebell. When you can’t push any harder, drop under, then stand.

For these lunges, the kettlebell can be held in either a goblet position or a front rack position.

This requires a lot of midline stability and core strength, as it’s important not to lean to one side when doing the lunges.

Holding it in a goblet position can sometimes help you to feel more balanced, as you hold it centered on your body as opposed to on one side.

You will have to hold on a bit more, as the kettlebell isn’t really resting “on” you, but rather, you’re holding onto it with both hands.

“Double unders” refers to jumping rope, where the rope passes under your feet twice each time you jump in the air.

Double unders take lots of practice to master – they are a high coordination movement, and require a lot of high neurological functioning.

Here is a great guide from WOD Prep on how to learn doubleunders.

Don’t waste a lot of time today during your workout trying to figure these out. If you have double unders already, great! Let’s use them.

If not, simply modify the workout by doing single unders and double the number of jumps. Work on consistency and speed.

How to approach this kettlebell partner workout

Make a strategy ahead of time on how you will divide up the work.

Doing shorter sets faster will give you a faster interval ratio; doing longer sets will be a bit slower during your work interval, but will give you more rest time.

Here’s how we chose to divide it up:

Kb Lunges: 20 per round, 2 rounds per person (alternating, swap KB side after 10)

Doubleunders: 25 per round, 2 rounds per person

If you wanted shorter intervals, you could cut these in half – do rounds of 10 instead of 20, and rounds of 5 instead of 10.

Overall, this workout should take you 20 minutes or less to complete. Post your time to the comments!

With a partner, complete the following for time:

If you don't have a D-ball, sub in a medicine ball, a sandbag, or a backpack loaded up to be heavy (don't put in anything you don't want to drop over and over again!)

If you don't have doubleunders, don't sweat it today - just sub in 200 single unders.

If you're attacking this kettlebell partner workout alone, cut the rep scheme in half, and use equal work/rest intervals - note how long your work interval takes you, and rest an equal amount of time before starting again. Think of it like you have an imaginary partner who is working while you are resting!

How to Do Toes to Bar
Next Post: The Best Minimalist CrossFit Shoes for Functional Fitness